Horse chestnut leaf miner (Cameraria Ohridella) is a moth pest which lives in horse chestnut trees.  It was first reported the UK in the early part of the 21st century, and it has spread to nearly all parts of England and Wales since then.  (Scotland had one confirmed sighting by 2014.)

The moth’s caterpillars eat inside the leaves (mining), causing the leaves to go brown and fall off before the usual autumn leaf drop.  A large group can damage most of the leaves on a tree each year.

Whilst the result is unattractive, the damage is not usually sufficient to damage the tree significantly, and the tree will produce new leaves in the next spring. 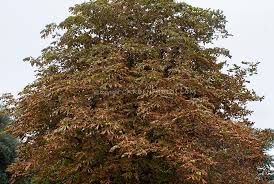 The problem is spread by a number of routes – the moths can be blown by wind into new areas, or carried on vehicles.  The moths, eggs and caterpillars can also be carried in leaf waste.

We can reduce the potential for damage by removing fallen leaves during the autumn and winter and either composting them thoroughly, to destroy the over-wintering pupae, or by covering small heaps of chestnut leaves with a layer of soil or other plant material to prevent the moths from getting out the following spring.